July 23, 2017 By Shared Parenting Confessional in Adult Children of Divorce, Impact on child

This parent shares the heartache as a child of divorce. She endured abuse from her mother and was neglected by her father. These negative experiences shaped her own views of marriage and being a parent. She confesses to preferring a life without either parent. Regardless of each parent’s misdeeds, this is an unfortunate family experience for anyone.

My parents divorced 36 years ago when I was 6. I did not see my father for 32 years due to my mother making contact difficult and moving us hundreds of miles away when she remarried very quickly afterwards. On the other hand, my father did not pay any maintenance or take her to court to enforce contact and he was minted at one time. He brought up someone else’s kids instead.

As a mother myself now, who would never, ever stop my own kids seeing their father if we divorced as I know how much they love him, I think both of them (my parents) are disgusting and I will never have either of them in my life again.

I have had long lasting mental health issues due to my father’s abandonment and my mother’s emotional abuse because I was ‘evil just like your father’. It is the children who suffer for their parent’s selfishness.

July 13, 2017 By Shared Parenting Confessional in Adult Children of Divorce, Impact on child, Reality of Divorce

This is the reality of an adult child of divorce (ACOD) raised by a narcissistic parent. “I wanted to share this with you because…even as a 31 year old, the effects of mental abuse are still very real for me, especially when it comes to my mother. Years and years of mind control cannot be erased in a decade. Yes, I am in a good place now, but it is because I choose to be and have been very careful to ensure I am in this headspace. Breaking that connection takes work. And a simple phone call that wasn’t even answered and very well could have been an accidental butt-dial *could* have set me off wanting my mother’s attention and love; it happened to me many times over the years. I know it’s a blackhole though. I have to be strong, for myself. Please try to keep this in mind and empathize with your alienated loved one. The emotional trauma of being raised by an alienator never goes away… Be strong and stay strong. Much love.” -KidOfPAS

November 29, 2015 By Shared Parenting Confessional in Adult Children of Divorce, Impact on child

A common theme in divorce the child wishing the reuniting of their parents.  This artwork shows that this wishing continues into adulthood.   The impact of divorce continues on.  For some adult children of divorce, their live is forever tainted.

“I went to one of my dad’s parties, and I saw him kissing a woman.

Ah, the joys of having your parents be divorced.

Basically, anyway, I freaked out and started sobbing and wishing that my parents would get back together, even though they divorced when I was four.” 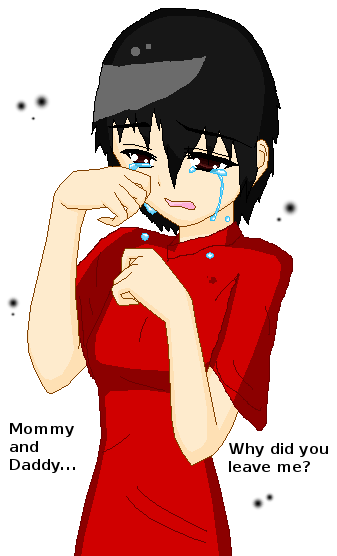 Deviant Art, I Miss My Family by iWish909

October 22, 2015 By Shared Parenting Confessional in Adult Children of Divorce, Impact on child

An adult child of divorce shares their psychological nightmare from divorce. How unfortunate this child sees that they were used as a pawn.  What an awful feeling that must be.  Parents have a responsibility to LOVE their child!  A sad story!

How I was affected

My name is Mike. I am an 18 year old freshman in college at the University of Texas. I was born and raised in New York. My parents got divorced when I was nine years old and my mom won custody of me and my younger brother. I was scared of my mom and, as a result, she was able to use me as a pawn against my father. My parent’s divorce went on for another ten years and I was primary source of communication between the two for the entirety of it. Although they have been divorced for a few years now, they are still fighting to this day, which upsets me. They try to involve me but I repudiate by telling them both that I cannot be involved in their disagreements anymore because their issues have corrupted my childhood. For all you parents out there, please make sure you do not involve your children in such a terrible process. It is not their job to know when their father is late on child support or how terrible of a person their mother or father may be. I wish I had other children to speak to during my parents divorce. I am hoping this forum (Divorce Force) will connect children in need of support with people that can act as an consiglieres during their parents’ divorce process.

September 15, 2015 By Shared Parenting Confessional in Adult Children of Divorce, Impact on child

An adult child of divorce shares the turbulent upbringing filled with abandonment and loneliness.  He recognizes how his mother lived a self-fulfilled life rather than a selfless life that a more attentive parent may choose.  Thankfully, he discovered the blessings of a secure family unit in his fathers’ family and found the fortitude to create a loving family of his own.   Imagine the heartache he could have been spared if his mother had provided a loving and secure environment. A parent who offers emotional security and unconditional love to their child is giving the best gift to their child!

My mother left because she was “not happy.” It was a simple answer, but it changed how I saw myself and everything else consequently. She said she had me out of wedlock, and back then felt pressured to marry, and no longer wished to stay with a man (my father) whom she didn’t truly love. She wanted to control her life, pursue her dreams, follow her destiny. But as far as I knew, she’d been doing that her whole life already.

If my mother had left my father after selflessly giving herself to the end to put her child at least through high school, even better, college(!), than I would’ve said: “Hey, my mother may not have been happy, but she put her happiness below her love for her child and after all this sacrifice, I’d support a peaceable separation now that I’m out of the house and all grown up.” But she didn’t. Even while married, even while still responsible for kids, she prioritized her happiness. In the end, every major turn in my life after that day she walked out of the house when I was only 8 or 9 years old, would be a result of me (and my younger sister) riding on the back of her every decision to pursue her own happiness. Her every new house and apartment, her vain attempts to integrate her boyfriend and eventual (legal, though rightly not recognized by our Church) second husband, all leading up to the two new daughters she had with him.

She was not “happy” she said, before she took control of her life. Now she was. But what puzzled me as a child was how every step towards her happiness meant my sadness. My alienation. My struggle. When she moved out of the house, I had to pack and unpack my entire life to accommodate each week where ever in the world she had decided to live next. As she introduced her boyfriend into our lives, I had to deal with the psychological guilt of being obedient and respectful to the man who was the cause of the divorce, the one who was the reason she’d come late to pick me up at school or leave me with virtual strangers to have dates. And once she had more children with him, step-siblings whom I love unconditionally for their is no personal fault in them, I had no choice but realize the sobering fact that HER happiness was contingent on whether she could replace her imperfect mistakes with my father (myself and my sister included) with children that were brought about in her state of new found happiness.

She’ll never admit it to us though, that’s so buried down in her consciousness that only therapy can bring it out. But I noticed it! “I still love you.” She reminds us constantly. But love is supposed to be self-less and my whole life, the example of love has always been one that seeks to satisfy oneself before any obligation before that. Yes, my mother wasn’t happy in her marriage. But her children were. Her children had no idea of the gulf between father and mother. But rather than subordinate her desires, she fed them until the idea of putting her flesh and blood through such stress became feasible.

I left my mother eventually, when I grew old enough to make the call. I was scandalized by a certain incident wherein I was forced to listen to her and her new significant others’ amorous activities without any consideration to my presence and my sensibilities and boundaries. In other words, I was tired of being second in her life. I was sick of a love which never took me into consideration. Since then I’ve been consistently with my father and his big loving Mexican family, many of which’s member’s have been the victims of affairs in their own failed marriages. We support each other, my uncles and aunts raise their siblings’ children as their own if they lack fathers or mothers and we cousins support each other like brothers and sisters.

Thankfully, I’ve since learned what true love looks like with my true family. And you know what, it makes me happy to be no one’s liability or mistake, but to be loved and cared for. And I hope with all my heart to recreate the same with my family.

Marriage-Ecosystem.org  So it is My Fault by Nicholas

September 15, 2015 By Shared Parenting Confessional in Adult Children of Divorce, Impact on child

Excellent question!  I wonder how many children and adults of divorce ask this question.

One artist shares thoughts on their parents’ divorce.  Sadly, the effects of divorce linger on for some.

September 3, 2015 By Shared Parenting Confessional in Adult Children of Divorce, Impact on child

An adult child of divorce shares their thoughts on divorce and the ever-present impact on their life.  A child should have access to both parents.  Notably, a child will figure out what happened and express thoughts on what SHOULD have happened.

For me the hardest part of my parents’ divorce was adjusting to having two families. One, that my mom wanted me to be in and one that my mom did not want me to be a part of-with my dad.  The divorce doesnt bother me.  What does bother me is being made to feel guilty for wanting to spend time with my dad.   To say it does not bring pain, doubts, and questions would be a lie.

Send your confession at: